Kimberly’s life's mission is to help everyone “breathe a little easier.”

But that wasn't always the case. Prior to attending Nebraska Methodist College, she worked in a call center for nine years before saying “enough.” She wanted a career where she could both provide for her family and put her people skills to good use.

Her mother was a nurse, so Kimberly knew the benefits of healthcare work. To Kimberly, it meant she could help people feel better every day while utilizing her passion for science. Still, she wasn’t sure nursing would be the best fit. Although she admired the stories her mother would tell, she knew she wanted a program that more narrowly focused on specific parts of the body.

A Program Worth Fighting For

After researching healthcare programs in Omaha, Kimberly decided on Respiratory Therapy. She loved how respiratory therapists could improve a person's quality of life by focusing on their breathing capabilities, and it also meant more opportunities for in-home healthcare.

"When I was looking at programs, I loved seeing how much respiratory therapists interacted with patients, and how you could see them breathe better,” she said.

Kimberly eventually found Nebraska Methodist College, and once she saw the modern facility and met the director of the respiratory therapy program, she applied.


After being accepted into NMC, Kimberly received the news that both of her parents had been diagnosed with cancer. As their primary caregiver, and with a five-year-old son to raise, the weight of everything proved to be too much, and Kimberly failed two classes despite her best efforts.

While crushing, Kimberly knew she had to continue, and rather than give up, she did everything she could to get back on the right track.

“I knew I had to finish what I started, even if that meant taking a year of classes outside the program,” she said.

She had to wait one year to reapply, but once she was back in respiratory care, Kimberly felt refreshed and anxious to begin anew.

“The second time I wasn’t letting anything get to me. Even my son wouldn’t want me to study, but I explained to him why we we’re doing this for us.”

The program is smaller than most: nine students will graduate this summer. But it was this close-knit group that helped her overcome the course challenges.

“Mechanical Ventilation was really difficult for me, but the other respiratory students broke it down for me, so I felt a lot less nervous,” Kimberly said.

The quid pro quo relationship worked when Kimberly had to intubate a patient during clinical, and her peers couldn’t wait to hear about how she did it.

“It’s very rare to intubate a patient, especially as a student. I just took a deep breath, listened to my instructor, and went for it.” said Kimberly.

This experience of “just going for it” proved to be crucial for Kimberly one day when her mother became short of breath. Kimberly's mom didn't want to go to the hospital, but she was able to convince her to seek help. This tough moment showed Kimberly just how applicable the knowledge she had learned in her program was.

“Nurses are tough patients, and my mom was so stubborn. But I told her that from everything I know from school, you have to go to the ER.” Kimberly said.

Being a mother and caregiver while completing the program wasn't easy. It took determination. But now, she has her Associate of Science degree in respiratory care, both her parents are stable and her son is relieved that she’s finished so they can spend more time together.

“I feel like he’s had to grow up a lot in the past two years but know he’s so happy for me to be done,” she said.

We here at NMC have no doubt that Kimberly will have a positive impact her patients as she embarks upon her career as a Respiratory Therapist. 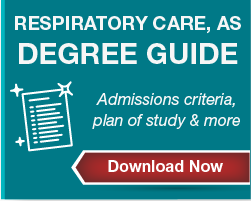